Art’s Birthday originated in 1963 when French surreal artist Robert Filliou declared that art didn’t exist until a million years ago when someone dropped a dry sponge into a pail of water. Choosing his own birthday of Jan. 17 to celebrate the event, Filliou proposed a public holiday, which has since been adopted by arts organizations and collectives in more than 20 nations worldwide. Edmonton first held such an event in 2008, presented by the Film and Video Arts Society at the now-defunct ARTery. The Edmonton Arts Council staged Art’s Birthday at Scona Pool the following year. Since 2010, BEAMS has facilitated the event annually.


Doors for Art’s Birthday open at 7 p.m., with the show starting at 8 p.m. Tickets are $10 at the door. BEAMS members get in for half-price. 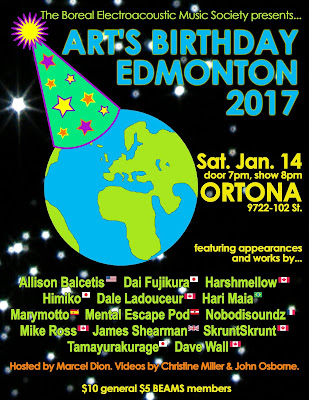