This year's Art's Birthday celebration features a diverse group of performers that explore a range of electronic and experimental music making approaches. From Blipvert's frenetic beat/glitch/noise and jumping up and down a lot, to Raylene Campbells dreamy layered drone compositions; it promises to be a great night of listening, conversation and art!

Art’s Birthday originated in 1963 when French surreal artist Robert Filliou declared that art didn’t exist until a million years ago when someone dropped a dry sponge into a pail of water. Choosing his own birthday of Jan. 17 to celebrate the event, Filliou proposed a public holiday, which has since been adopted by arts organizations and collectives in more than 20 nations worldwide.

BEAMS first held such an event in 1998 at the Ortona Armoury Arts Building, which was streamed over the Internet to the mbar Art's Birthday celebrations in Helsinki, Finland. In 2008, the Film and Video Arts Society presented it at the now-defunct ARTery. The Edmonton Arts Council staged Art’s Birthday at Scona Pool the following year. Since 2010, the Boreal Electroacoustic Music Society (BEAMS) has facilitated the event annually. 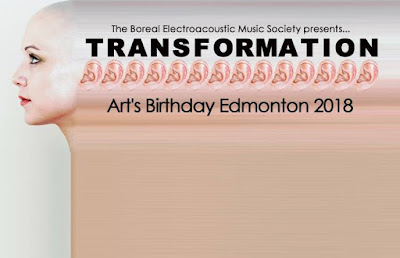 BEAMS At the WORKS Festival 2017

https://archive.org/details/20170629BEAMSATTHEWORKSJohnnyBordeaux
The Boreal Electroacoustic Music Society (BEAMS) teams up with The Works Art & Design Festival to present eight acts who take on the event's theme of dialogue, resulting in unique ways of expressing the idea of communicating in unusual genres. To wit:

Johnny Bordeaux
What happens when two Theremins talk to each other?

Jared Epp
What strange sounds surface from an urban environment?

S.C. Land
Is there art in social media?

This 90-minute all-ages event is free to the general public.
Posted by Abram at 3:56 PM

BEAMS at The Works: call to performers

BEAMS (Boreal Electroacoustic Music Society) will be presenting a concert as part of this year's The Works International Art & Design Festival. The event takes place June 29 at a gallery venue to be determined.

We require sonic artworks that explore the concept of “Dialogue”, this year's Works Festival theme as described below:

"Dialogue is essential to understanding. Not all dialogue is expressed in words. Interaction changes the course of a project, and often more questions remain than answers. Dialogue is about opening the evolution of an artwork to outside and potentially differing influences before the process is declared complete."

Performance pieces should be less than 12 minutes in duration and somehow explore this theme. It is open to interpretation how the idea of “dialogue” can be explored in the context of sound art and experimental music. Improvisations, interactive works, solo or ensemble, exploring new audience performer paradigms, machine-human interactions, sound poetry...your imagination is the limit.

Submit a description of your performance (especially as it relates to the festival theme), number of performers, duration of piece and technical requirements to info@beams.ca by June 7, 2017. An artist fee will be paid for performed works.
Posted by Abram at 9:48 AM

Here's footage from the BEAMS 420 show at Bohemia! 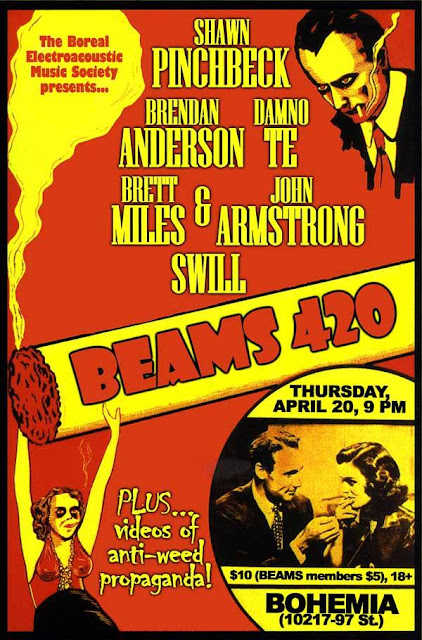 EDMONTON — A handful of enterprising, experimental sound artists from Calgary’s Alberta
College of Art & Design venture north to Edmonton for a night of sonic innovation. Invited by
BEAMS president and electroacoustics professor Shawn Pinchbeck, who taught the students at
the college until 2016, the performers bring with them an arsenal of noise, sound and
unconventional music that’s not been heard outside of Calgary.

The show will feature works by Callum Beckford, who incorporates homemade synthesizers
with commercial gear, as well as the duo of Kerry Maguire and Gwen Morgan, who craft their
compositions with the use of field recordings, drum beats and live synthesizers. Also included on
the bill is DTH LVL, a tandem act comprised of Eric Makwich and Matthew Henry, who
perform a dark and grimy blend of electronic and noise sounds.

This production is presented by the Boreal Electroacoustic Music Society, an organization that
promotes and nurtures sound-oriented artworks, creators and performers.

Callum Beckford Is a wide-eyed wanderlust filled sound artist from Calgary Alberta. His performances incorporate homemade synthesizers and effects as well as commercial gear. Through analogue and digital processing of sound, he strives to gain a deeper understanding of the ethereal nature of sound and how it exists both as a physical experience and a conscious phenomena.

"Champagne Wishes and Caviar Dreams" is an ongoing live sound performance by Kerry Maguire and Gwen Morgan. Crafted from field recordings, drum beats and live synthesizer, it is a project that incorporates audio from in around each space it is performed; playing on memory, deja vu and melding contemporary electronic music with experimental audio.

Gwen Morgan and Kerry Maguire are artists and musicians from Calgary, Alberta. They both pursue individual art practices as students at the Alberta College of Art + Design, and have collaborated on many audio and sculptural installations. They have also played in bands together, such as Juice Box and Crims & Flow.

DTH LVL are a dark and grimy blend of electronic and noise. in the immortal words of roni size: "do you think that you can hang tough when the rhythm gets gruff and the dj says, "i think you've had enough"?"