Imagery and Music at the Garneau Theatre

When:  Tuesday January 14th 2014 @ 7:00PM
Where: Garneau Theatre 8712 109 st.
What: Animator John Osborne teams up with of the Boreal Electro-Acoustic Music Society Orchestra for a stimulating evening of moving imagery and live improvised music. The BEAMS musicians, including Don Ross (clarinet), Allison Balcetis (saxophone), Cam Neufeld (violin), John Armstrong (theramin), and Wilf Kozub (synths) will create spontaneous soundscapes to match the moods of over a dozen short films. The hallucinatory imagery runs from the representational to the abstract. This will be a rare opportunity, not to be missed.

EDMONTON—The Boreal Electroacoustic Music Society (BEAMS) has announced it will host Art’s Birthday 2014, as part of an international tradition that’s been going on for more than 50 years. The Edmonton installment takes place at Britney’s Lounge (10225-97 Street) Friday, Jan. 17 starting at 7 p.m. Admission is $10, with BEAMS members getting in for half-price. With more than 10 acts confirmed thus far, and billed as Where is Utopia, the 2014 version contains a more eclectic lineup than ever.

Appearing at Art’s Birthday 2014 will be folk singer and social activist Paula Eve Kirman, a regular performer on the protest circuit. Recognized for her lyrical take on social injustices, Kirman is a member of such groups as the Daughters Day equal rights initiative and the Edmonton Coalition Against War and Racism.

Performance artist Lascaux Proxy has been confirmed to deliver a set blending electronic music with modern dance and live theatre. So far within the past year, she’s released more than a half-dozen works, collaborated with integrated dance act CRIPSiE, and played at such events as NeXtfest and A Queersummer Night’s Dream.

Avant-garde act agaperaygunexperiment returns with its own brand of audio and visual improvisation. The latest incarnation of the group act is slated to include Japanese grindcore vocalist Himiko Dethnoizz, whose latest CD has been released on the Toronto-based D-Trash label.

Art’s Birthday was first proposed in 1963 by French artist Robert Filliou, who suggested the discipline didn’t exist until more than a million years ago when a sponge was dropped into a pail of water. After using his own birthdate of Jan. 17 to mark the occasion, Filliou’s notion has since been adopted by a global community that includes participants in Canada, the U.S., the U.K., France, Belgium, Portugal, Spain, Finland, Germany and Austria. A listing of supporting organizations and worldwide events can be found at artsbirthday.net.

BEAMS member Fl3m is playing Sunday 15th at Wunderbar at 3:30. 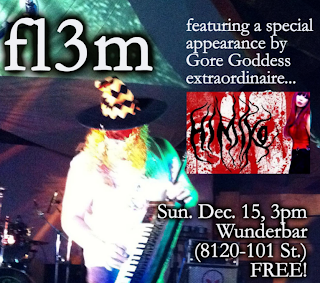 Furthermore Unsilent Night is at 4:30 Sunday the 15th starting at the Alberta community league http://edmonton.unsilentnight.com/ Bring your boombox!

BEAMS and RapidFireTheatre Hit it off!

Here is video of BEAMS + Rapid Fire's own Tim Mikula and Colin Matty improvising with comedy and music together!

For more information, write info@beams.ca. The Ortona Room is at 9722-102 street. 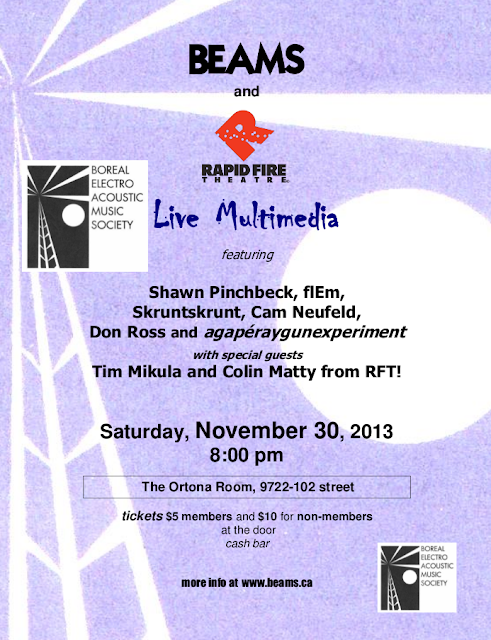 This was part of a BEAMS Art’s Brithday show at Naked Cybercafe back in 2010.

Video of BEAMS @ The WORKS Festival 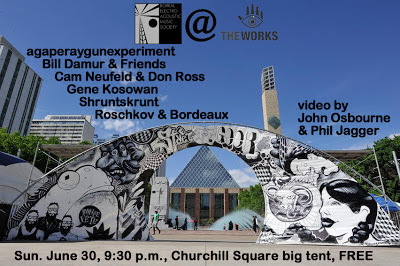 
Gene Kosowan, One Day I Slept In and Missed the Future, Dur: 5’

Evelyn Berg’s photography show at Galerie Pava, 9524-87 Street, will be enriched next Sunday with musical and poetic interpretations. Evlyn’s husband Reinhard accordeon, Silvia Buttiglione, cello, and Matia Berrini, violin will perform a variety of music including some solo and trio improvisations interpreting specific images in the show, as well as rearrangements for trio of some of Reinhard’s compositions. In addition, Amélie Aubé Lanctôt will recite some original poetry similarly inspired. The performance is Sunday, June 23, 2013 at 2 PM; refreshments will be served. CARSCAPES will be on display till July 17, Tuesday – Saturday 10 – 4. 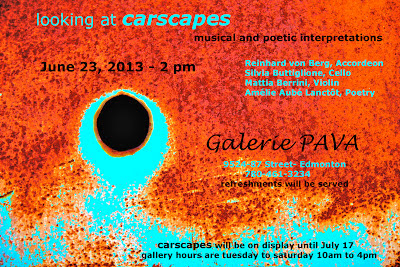 Shawn Pinchbeck presents, an Evening of Sight and Sound

Shawn Pinchbeck presents, an Evening of Sight and Sound:

This Saturday the 13th at 10:00 pm BEAMS is thrilled to be performing our first collaboration with the madcap sketch comedy improvisers of Rapid Fire Theatre as part of their Bonfire Festival. BEAMers Allison Balcetis, saxophones, and Cam Neufeld, electric violin, will be joining Don Ross on clarinets and electronics to present Slippery Sounds with Ben Gorodetsky and him team of comic geniuses.

How does electroacoustic improv work with sketch improv? Divinely, as it turns out! Instead of hearing “tweedle tweedle” when someone says “look at the birds” you’re just as likely to hear “skronk! crumble”.....it works! Come on out! Zeidler Hall at the Citadel, deets in link below. 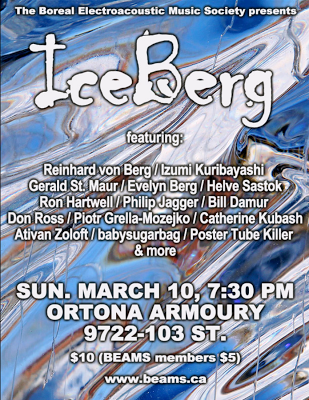 Reefer Madness, the movie that proclaimed marijuana to be “Public Enemy No. 1” when it was released more than three-quarters of a century ago, returns to the silver screen with a surreal soundscape. The movie, which will include live accompaniment, runs Sunday, Feb. 24 at 8 p.m. at Wunderbar Hofbrauhaus (8120-101 Street). Admission is $8, no minors allowed. BEAMS member fl3m will provide the score for the movie, while fellow BEAMS members Shawn Pinchbeck and Allison Balcetis will perform live with a series of vintage shorts.

“It's sure to be weird,” said Wunderbar owner Craig Martel, who viewed an advance screening of the doctored film before agreeing to a performance date.

For this occasion, the 1936 outing of Reefer Madness, originally funded by a church group to propagandize the evils of marijuana -- but wound up becoming a cult exploitation classic -- has been converted into a silent film, captioned and edited down to 45 minutes. All audio has been replaced by a totally original soundtrack created from such sources as orchestral tunings and factory machinery. The soundscape is designed to go beyond the contemporary confines of "stoner rock," and even into territory beyond what is deemed music.

For more information, visit wunderbar-edmonton.com online or The New Wunderbar Hofbrauhaus page on Facebook or email Gene Kosowan at g_kos@yahoo.ca
Posted by Abram at 11:11 PM 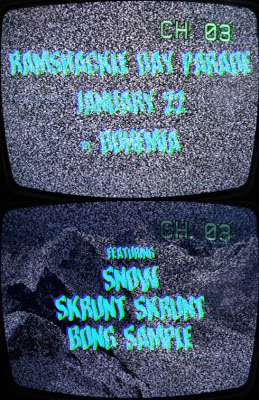